The text from a note written by a child was found in one of his father’s books over 10 years after it was written. It reads;

If you read this don’t tell [mother’s name]

After mommy hits me, inside
it make me feel like she wants
me to get out of the house.

To the father who endured the beatings during marriage and witnessed the abuse of the child this note was clear confirmation of what he instinctively knew -- the beatings of him had been transferred to the child once he was no longer available to abuse. Yet, while this was happening a custody battle ensued in which the mother also engaged in blatant acts of alienation and violation of court orders. But now Indiana Supreme Court Justice Steve David still awarded sole legal and physical custody of the child to the abusive alienator while the child was given only minimal contact with his father who had his legal decision making rights stripped.

So you ask how does this happen? It is contrary to reason, logic and the evidence. It is not without precedent and common recurrence though. I have observed a pattern similar to this case in which I now position litigant parents to avoid the trap that settled this child into an abusive household at the cost of being safe and secure in the custody of his father. 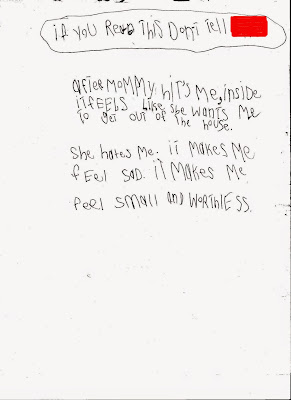 First, there is the gynecocracy which has conditioned society, including judicial officers, to accept Domestic Violence against those who are the targets at the highest rate and to ignore that women commit or perpetuate any acts of Domestic Violence, especially against children. The other problem which occurs is found in the pedagogy of law schools. Lawyers - of which judges are prior to being judges - are taught to apply inductive reasoning in arguments over evidence as few deductive certainties exist. That is, they draw a conclusion based upon probabilities. In short they go with a hunch.

Traces from the past infect the conclusion process. Biases permeate the lives of everyone including judges. We are who we are and decide what we do based upon our experiences. Most of us will hold a bias that a wood or tile floor will provide ample support for us and thus we readily walk onto them. Someone like me who had a business doing structural restoration of buildings or a firefighter may approach an elevated floor for the first time with some degree of apprehension. Biases are not to invade the legal arena as judicial rules provide that presumptions and biases about litigant parents are to be suspended by judicial officers. But, just as you are likely to be unable to readily suspend your bias of floor permanence, judges are unlikely to suspend their latent biases about parents and parental backgrounds that motivate presumptions in particular child custody actions.

So where did the system, and particularly Judge Steve David, fail this child who was beaten by the mother awarded custody? It begins with the mental sets that judicial officers have developed through their experiences. These are the heuristics applied with the intent to make current cases proceed more efficiently. Thus, when in the past a father made an abuse or alienation allegation against the mother it was challenged as an attempt to get custody of the child to further his control of the mother as perpetuation of the domestic abuse that occurred within the familial household. This challenge is likely to be upheld because it resonates with the judicial officer’s biases developed through some past event. That event could be something he or she read.

The American Bar Association in its guidelines for judges making child custody decisions claims that “[c]ustody disputes can be a litigation tactic that allows the battered woman to be revictimized. A father may threaten to sue for custody, seek modification, or oppose relocation as a bargaining tool. He may discover that his wife may be willing to forego rights to child support and alimony in exchange for custody. For example, one study indicated that women reduced their requests for resources during negotiations when they were afraid that they might lose custody.”[emphasis added][fn1]

The avoidance of gender neutral terms such as ‘parent’ or ‘spouse’ are intentional because the American Bar Association wants children to be abused. The abuse of children facilitates greater use of attorneys through custody challenges, criminal trials of neglectful and abusive parents, CHINS cases, and juvenile delinquency proceedings.

Without sufficient evidence, in some cases the refutation attempt is successful and the caring protective father is now perceived as a controlling abuser. There is also the cases where sufficient evidence exist that a parent is abusive or engaging in alienating tactics but the judicial officer decides against the evidence. Through using inductive reasoning as applied through the lens of the judge’s biases the caring parent is assumed to be the most cunning abuser while evidence of alienation is transposed into an involuntary reaction -- the result of the instinct to protect the child. It is the natural response to these false attributions and misinterpretations that then underlies the problem.

The defeated parent assesses the outcome and determines that for a future challenge to stand he or she must gather sufficient evidence prior to launching the next custody modification action. Now, the parent becomes a stalker because the evidence needed takes place within or around the residence of the abusive/alienating, now sole custodian, parent. The challenging parent may also take the child to medical care providers for abuse assessment which, if unsubstantiated, is interpreted by opposing counsel or the court as ‘bringing the child into the fray’ of litigation and subjecting him or her to the trauma of the investigation. This will also be seen as an alienating action. The drive of the caring parent to protect the child through relentless efforts at getting evidence before the court is the action of a ‘manipulating and controlling abuser who just won’t give up and move on with his or her own life’ as opposing counsel will clearly articulate. Any of this sound familiar yet?

Parents must be cognisant of their actions and be vigilant to ensure that they are not engaging in alienating behaviours which may be obscured through rationalization. There must also be the deontological consideration that just because the intention feels noble does not correlate to the act not being alienating. In Self-Imposed Parental Alienation I wrote about the way in which alienating behaviours by a parent may be alienating the child from the acting parent rather than the target or both.

Although these unsuccessful attempts to protect a child suffering actual harm may be far fewer than the substantiated cases they are more readily implanted into the memories of judicial officers and recalled as a product of latent learning. Thus, instinctual biases based upon flawed accounts of abuse, such as what the American Bar Association tries to perpetuate, mount in a judge’s mind. Like the axiom that lost items are always found the last place you look [because you quit looking once found] the litigation in substantiated cases -- where the child goes to the caring parent -- quickly diminishes and is not reinforced in memory. In the cases of actual abuse that is unsubstantiated or refuted the litigation continues and the caring parent may become more desperate and hostile as the ongoing efforts to protect the child are thwarted. Thus, these protracted and highly litigious cases are more likely recalled as the repetition reinforces memory. This further contributes to the bias through a circular process.

Eventually, unable to prove the case, or financially and emotionally depleted, the caring parent gives up. This is where the confirmation bias takes hold and the propensity to rule against protective parents is solidified. The judicial officer sees it not from the objective viewpoint but rather from the biased premise that the controlling abuser or truly alienating parent has finally given up and moved on with his or her life. So once again another protracted case of a caring parent leveling truth based allegations against the abusive or alienating parent is dumped into the memory abyss of the judge to further strengthen that unconscious bias that parents, fathers most often, who want custody of the children are controlling abusers who haven’t accepted the demise of the family unit.

This is not to say that proper evidence of parental fitness should not be presented. Effectively litigated child custody cases integrate current parental behaviours with a trial strategy that balances the submission of evidence that furthers the well-being of the children against proper evidence that would also serve that goal but may instead appeal to negative biases. It is a fine line to walk which requires an understanding of the parents, practitioners and the presiding judicial officer.

The child who wrote that note doesn’t recall the violence in the marital home or that directed against him later by his mother. Children in these circumstances may emotionally shield themselves from the abuse and align with the alienating parent. The protective parent must be vigilant in ensuring that his or her actions are protective and supportive of the child without being alienating; e.g. enquire about how the child feels when arriving for your parenting time but don’t express feelings of relief that you know he or she is safe now by being in your care or by asking the child if he or she feels safe by being with you now.

I have consulted on numerous cases, usually at the appellate level, in which there was actual abuse and alienation yet the lawyers had never been able to achieve a positive result for the children. Common to all of these cases was a legalistic approach of force-feeding evidence to the judicial officer and a trial strategy that mimicked a victory by attrition approach. The wheels of justice move slowly and while protecting children from judges like Steve David is possible it must be done in a manner that doesn’t allow decisions to be made based upon biases instead of an objective view of the evidence.

©2008, 2015 Stuart Showalter, LLC. Permission is granted to all non-commercial entities to reproduce this article in it's entirety with credit given.
Posted by Stuart Showalter - Child Custody Advisor at 8:56 AM